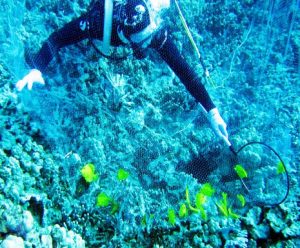 The state records suggest that on average 20,000 reef animals continue to be taken from Hawaii’s reefs every month despite the court ruling. The total number of reef animals potentially trafficked in violation of the court order could conservatively exceed 200,000 animals, not including under and non-reporting, since the October court ruling.

Ironically, the state is allowing this continued mass collection despite its own recent determination, after reviewing the pet industry’s initial environmental assessment, that commercial aquarium collecting significantly impacts our marine environment, and therefore requires a full environmental impact study to comply with the Hawaii Environmental Policy Act.

“It’s outrageous that the state continues to disregard the court’s clear positions that aquarium collecting is subject to Hawaii’s environmental laws, including the most recent Circuit Court ruling that even recreational extraction of less than five animals per day is also subject to environmental and cultural analysis,” said Rene Umberger, executive director of For the Fishes.

“The Ige Administration has given the mainland pet industry the green light to take all the marine life they want, without regard for HEPA and court rulings, and with zero enforcement to ensure rules aren’t being broken,” said Mike Nakachi, native Hawaiian practitioner for Moana Ohana. “Rather than do its job to conserve our sacred reef resources for the Kanaka Maoli and future generations, the Administration continues to go out of its way to cater to private, commercial interests who exploit our people and wildlife.”

“The cruel, environmentally harmful and potentially illegal collection of Hawaii’s precious coral reef wildlife must be stopped,” said Keith Dane, Hawaii policy adviser for the Humane Society of the United States. “Governor Ige should step up and put an end to this ongoing destruction of our natural resources for the personal financial gain of a handful of individuals and corporations.”

This appeal does not apply to take under Special Activity Permits which are used by public aquariums, research and educational institutions.

Rene Umberger, For the Fishes, rene@forthefishes.org