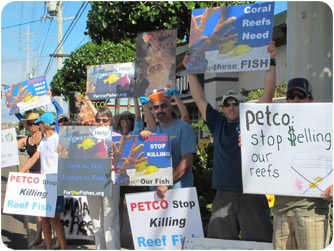 HONOLULU (October 25, 2019) – Today, For the Fishes joined national animal protection organizations in commending Walmart, Inc, for upholding its commitment to ending the sale of live fish at its more than 1700 stores nationwide. The national retailer announced its plans to discontinue sales in March of this year and, as of today, no longer advertises the sale of pet fish on its website or in-store. Walmart was said to have been responsible for the sale of 30 percent of tropical, freshwater, fish sales in the U.S., and made the decision to stop sales due to pressure from consumers concerned about the welfare of the animals.

“We thank Walmart for ending the sale of pet fish, and urge Petco, the nation’s largest retailer of pet fish to do the same.” said Rene Umberger, executive director of Hawai‘i based For the Fishes. “Petco is plagued with the same issues that led Walmart to end fish sales, namely the inability to provide proper care to the animals in their stores and failure to provide customers with accurate information and instructions on proper care for their new fish pets. Worse, unlike Walmart, which sold primarily captive-bred, freshwater fish, Petco and its online store, LiveAquaria, sells marine life captured from the world’s threatened coral reefs, including Hawai‘i’s, which is far more harmful than Walmart’s practices ever were.”

More than a half a million of Hawai‘i’s fragile reef animals have been taken from Hawai‘i’s reefs since a September 2017 Hawai‘i Supreme Court ruling invalidated aquarium collection permits, pending environmental review. Many of these animals, such as the yellow tang, continue to be sold at Petco although likely captured in violation of the court ruling.

Walmart isn’t the first major corporation to adopt a policy that reduces the suffering of aquatic life sold as pets. It joins eBay, Inc., the largest multinational e-commerce corporation in the US, In September of last year, discontinued the sale of Hawai‘i’s marine animals on its platform, complementing its long held policy of prohibiting the sale of pets or wildlife, although individuals and retailers in the aquarium trade had continued to post Hawai‘i’s marine animals for sale.

Corporations such as Walmart and eBay play a key role in protecting wildlife by enacting policies where local government is unable or unwilling to act, as seen with similar corporate policies against the sale or shipment of ivory, shark fins and other wild animals and their parts and products.